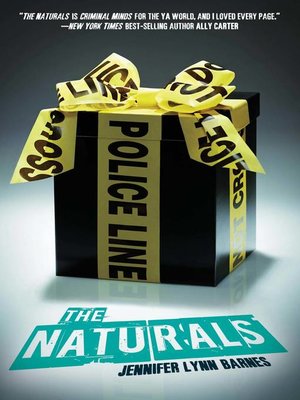 View more libraries...
Cold cases are about to get hot. Don’t miss this exhilarating crime thriller—perfect for fans of Criminal Minds and A Good Girl’s Guide to Murder—from Jennifer Lynn Barnes, the #1 New York Times bestselling author of The Inheritance Games.
Seventeen-year-old Cassie is a natural at reading people. Piecing together the tiniest details, she can tell you who you are and what you want. But, it's not a skill that she's ever taken seriously. That is, until the FBI come knocking: they've begun a classified program that uses exceptional teenagers to crack infamous cold cases, and they need Cassie.
What Cassie doesn't realize is that there's more at risk than a few unsolved homicides-especially when she's sent to live with a group of teens whose gifts are as unusual as her own. Soon, it becomes clear that no one in the Naturals program is what they seem. And when a new killer strikes, danger looms close. Caught in a lethal game of cat and mouse with a killer, the Naturals are going to have to use all of their gifts just to survive.
Think The Mentalist meets Pretty Little Liars — Jennifer Lynn Barnes's The Naturals is a gripping psychological thriller with killer appeal, a to-die-for romance and the bones of a gritty and compelling new series.
Praise for The Naturals
"The Naturals is Criminal Minds for the YA world, and I loved every page." -New York Times best-selling author Ally Carter
* "[A] tightly paced suspense novel that will keep readers up until the wee hours to finish." -VOYA (starred review)
"This savvy thriller grabs readers right away." -Kirkus Reviews
"It's a stay-up-late-to-finish kind of book, and it doesn't disappoint." -Publishers Weekly
"In this high-adrenaline series opener...even a psychic won't anticipate all the twists and turns." -Booklist