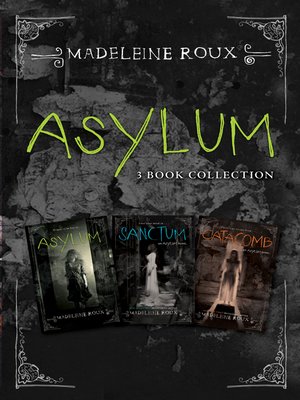 Asylum: Madeleine Roux's New York Times bestselling Asylum is a thrilling and creepy photo-illustrated novel that Publishers Weekly called "a strong YA debut that reveals the enduring impact of buried trauma on a place." Featuring found photographs from real asylums and filled with chilling mystery and page-turning suspense, Asylum is a horror story that treads the line between genius and insanity.

Sanctum: In this haunting, fast-paced sequel to the New York Times bestselling photo-illustrated novel Asylum, three teens must unlock some long-buried secrets from the past before the past comes back to get them first. Featuring found photographs, many from real vintage carnivals, Sanctum is a mind-bending reading experience that blurs the lines between past and present, genius and insanity.

Catacomb: The heart-stopping third book in the series follows Dan, Abby, and Jordan as they take a senior year road trip to one of America's most haunted cities, uncovering dangerous secrets from their past along the way, and realizing that sometimes the past is better off buried. . .