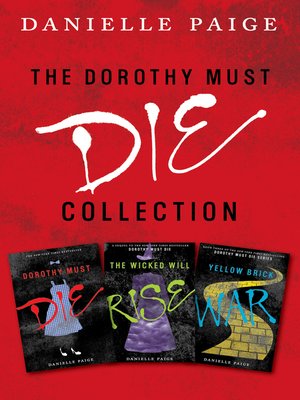 There's a new wicked witch in Oz—and her name is Dorothy. The Wonderful Wizard of Oz meets Kill Bill in this edgy, fast-paced, fantasy-adventure series from New York Times bestselling author Danielle Paige. This collection includes all three novels in the series, including the hotly anticipated Yellow Brick War!

Dorothy Must Die: Oz has turned into a savage dystopia under Dorothy's rule—and now a new girl from Kansas must take her down. Amy Gunn been recruited by the Revolutionary Order of the Wicked. Her mission: Remove the Tin Woodman's heart. Steal the Scarecrow's brain. Take the Lion's courage. And—Dorothy must die.

The Wicked Will Rise: With the Revolutionary Order of the Wicked scattered across Oz, Amy Gumm is on her own in the twisted fairyland. As she searches the kingdom in the hopes of destroying Dorothy once and for all, Amy realizes that nothing is what it seems in Oz and everyone has their own agenda.

Yellow Brick War: Amy Gumm's mission to take down Dorothy Gale is not going according to plan. Dorothy has found a way to bridge the worlds of Oz and Kansas, and Amy finds herself back where it all began: Dusty Acres Trailer Park. If Dorothy has her way, Kansas will be destroyed forever.