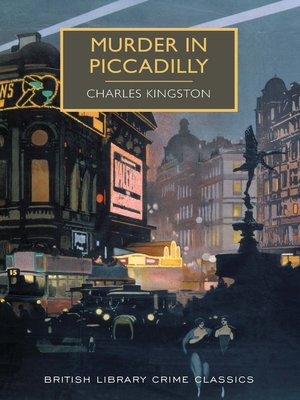 "This is another entry in the attractive, period-style paperbacks in the British Library Crime Classics series. Pair Murder in Piccadilly with Freeman Wills Crofts' Antidote to Venom, also notable for its psychological acuity and also available in the same series." —Booklist

'Scores of men and women died daily in London, but on this day of days one of them had died in the very midst of a crowd and the cause of his death was a dagger piercing his heart. Death had become something very real.'

When Bobbie Cheldon falls in love with a pretty young dancer at the Frozen Fang night club in Soho, he has every hope of an idyllic marriage. But Nancy has more worldly ideas about her future: she is attracted not so much to Bobbie as to the fortune he expects to inherit.

Bobbie's miserly uncle Massy stands between him and happiness: he will not relinquish the ten thousand a year on which Nancy's hopes rest. When Bobbie falls under the sway of the roguish Nosey Ruslin, the stage is set for murder in the heart of Piccadilly—and for Nancy's dreams to be realised.

When Chief Inspector Wake of Scotland Yard enters the scene, he uncovers a tangled web of love affairs, a cynical Soho underworld, and a motive for murder.

This good-natured vintage mystery novel is now republished for the first time since the 1930s, with an introduction by the award-winning crime writer Martin Edwards, the leading expert on inter-war detective fiction.