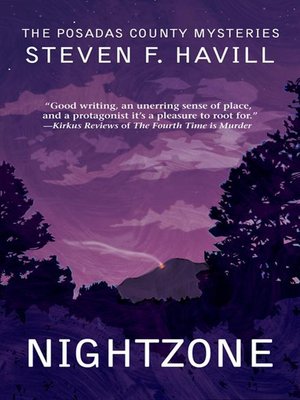 "Gastner's capabilities are plausible for a septuagenarian, and Havill peoples the book with believable characters." —Publishers Weekly STARRED review

What do you do when you inherit $330 million after taxes? If you're New Mexico rancher Miles Waddell, you build a dream. Waddell's dream is NightZone, an astronomy-based theme park complete with giant radio telescope, a bank of smaller scopes linked to a theater, five-star dining in a restaurant with retracting dome ceiling, a hotel/resort, tram car access, and a narrow gauge steam locomotive to carry tourists to the mesa top.

But the dream becomes a nightmare when two eco-terrorists chain-saw down power lines that feed the development. One of them is killed by a bucking power pole; the other escapes by car. From 20 miles away, retired Posadas Sheriff William K. Gastner spots a pair of headlights as the dead man's companion speeds from the scene.

Soon charges include murder when the fleeing conspirator is stopped by a cop and guns the lawman down. Hours later Gastner stops to assist Sgt. Jackie Taber during an unrelated traffic stop, and 74-year-old Gastner becomes the focus of a second investigation by the District Attorney and Sheriff's Department.