The Hog's Back Mystery 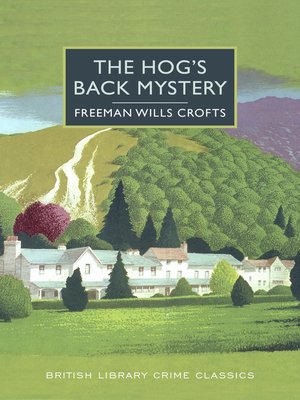 'As pretty a piece of work as Inspector French has done... On the level of Mr Crofts' very best; which is saying something.' —Daily Telegraph

Dr James Earle and his wife live in comfortable seclusion near the Hog's Back, a ridge in the North Downs in the beautiful Surrey countryside. When Dr Earle disappears from his cottage, Inspector French is called in to investigate. At first he suspects a simple domestic intrigue—and begins to uncover a web of romantic entanglements beneath the couple's peaceful rural life.

The case soon takes a more complex turn. Other people vanish mysteriously, one of Dr Earle's house guests among them. What is the explanation for the disappearances? If the missing people have been murdered, what can be the motive? This fiendishly complicated puzzle is one that only Inspector French can solve.

Freeman Wills Crofts was a master of the intricately and ingeniously plotted detective novel, and The Hog's Back Mystery shows him at the height of his powers. This new edition of a classic mystery is introduced by the crime fiction expert Martin Edwards.