First Season / Bride to Be 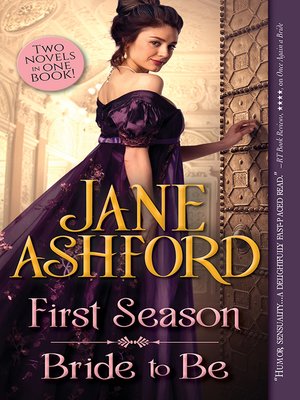 Widowed Lady Anabel Wyndham was married right out of the schoolroom and has never before experienced the delights of a London Season. She's dazzled by the attention of the fascinating Sir Charles Norbury, a man whose touch seems to melt her very soul, but a notorious rake. She's drawn to handsome friend-of-the-family Christopher Hanford and the comfort and serenity he offers. But how does one choose between two such charming suitors? Anabel is finding that love is so much more dangerous the second time around.

Emily Crane is the toast of the ton—and she couldn't find it more tedious. Until she encounters the darkly sensual stranger whose life she once saved and the London Season becomes infinitely more exciting. Recently returned from the wilds of South America, Lord Richard Sheldon has only contempt for tiresome London chits, but he finds himself stunningly intrigued by the dauntless Emily Crane. When the two become embroiled in a budding scandal and are forced into an engagement, they discover a passion more dangerous than any killer...

Praise for The Bride Insists: