The Love That Split the World 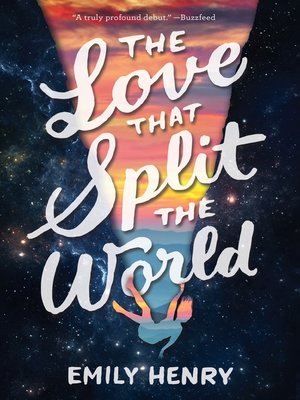 View more libraries...
"A truly profound debut."—Buzzfeed
"A time-bending suspense that's contemplative and fresh, evocative and gripping."—USA Today
"Henry's story captivates, both as a romance and as an imaginative rethinking of time and space."—Publishers Weekly
"This time-traveling, magical, and beautifully written love story definitely deserves a spot on your bookshelf."—Bustle

Emily Henry's stunning debut novel is Friday Night Lights meets The Time Traveler's Wife and perfectly captures those bittersweet months after high school, when we dream not only of the future, but of all the roads and paths we've left untaken.

Natalie's last summer in her small Kentucky hometown is off to a magical start . . . until she starts seeing the "wrong things." They're just momentary glimpses at first—her front door is red instead of its usual green, there’s a preschool where the garden store should be. But then her whole town disappears for hours, fading away into rolling hills and grazing buffalo, and Nat knows something isn't right.

Then there are the visits from the kind but mysterious apparition she calls "Grandmother," who tells her, "You have three months to save him." The next night, under the stadium lights of the high school football field, she meets a beautiful boy named Beau, and it's as if time just stops and nothing exists. Nothing, except Natalie and Beau.