The Kingdoms & the Elves of the Reaches #3 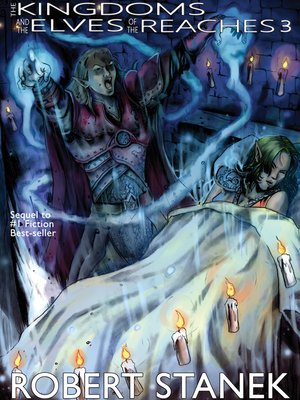 The sequel to the #1 Fiction bestseller! The Kingdoms and the Elves of the Reaches #3 takes us one step further into the unraveling mysteries of a world being torn apart by ancient prophecies and the machinations of warring peoples. Thirteen-year-old Adrina and her friend Emel managed to save the crown prince and to survive the Battle of Quashan', but now they face even greater challenges and ever more uncertain odds as they try to help the elves. Galan, the beautiful lady elf, is dying. Her life hangs by the barest of threads and only Seth can save her, but to do this he needs a miracle, especially with treachery afoot and danger at every turning of the road. Vilmos's decision to train as a mage has come at a great price and he was forced to face the shapeshifters of the night and their terrible queen. While helping the men of Great Kingdom to victory, he learned much about himself and his powers. Now he must journey with Xith to the Mouth of the World and foreign lands to help the master wizard form alliances with those who can help the forces of good stand against the coming darkness, but there's a malevolent force growing within him. One that cannot be explained, or tamed. One that may sweep away everything of the boy once was. What treachery, betrayals and intrigues are ahead? Find out in The Kingdoms and the Elves of the Reaches #3. Books #1–#4 in the series are also available, as is the sequel series, In the Service of Dragons.