The Kingdoms & the Elves of the Reaches #4 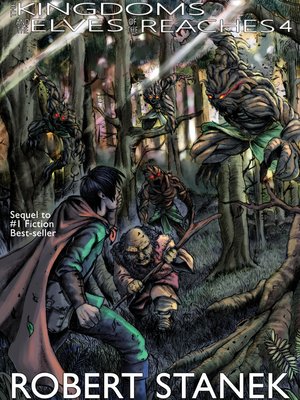 The sequel to the #1 Fiction bestseller! the Kingdoms and the Elves of the Reaches #4 brings to a close the epic fantasy adventure which began with The Kingdoms and the Elves of the Reaches #1. In this exciting fantasy adventure, Vilmos finds himself lost to the darkness within himself and at odds with everything he has even known. If he can't find a way out of the darkness, it won't be his life that is lost, it will be his eternal soul. Back in Imtal, Adrina and Valam work together to turn more kingdomers and council members to the cause of the elves of the reaches. A select few have begun to train in the ways of the elves, to prepare themselves for battle with those who can reach into the minds of their enemies. But there are many against an alliance between men and elves, and many who plot against the crown prince and the king. Meanwhile, Emel has undertaken a journey to find answers about the Orb of Power, yet it's a journey he may never return from. Will Vilmos succumb to darkness? Will Valam succeed? Will Great Kingdom survive the shaking of its very foundation? Will Emel get his answers? Will Adrina finally learn the truth about her role in the ancient prophecies? Find out in The Kingdoms and the Elves of the Reaches #4. Books #1–#4 in the series are also available, as is the sequel series, In the Service of Dragons.