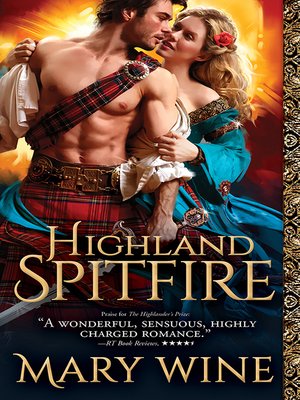 Two hotheaded Highlanders, the offspring of feuding lairds, are tricked by the King's Regent into a desperate choice: marry or die. Bhaic MacPherson is more disposed to lead his clan into battle than stay married to the daughter of his enemy. But perhaps the intensity of his feelings has more to do with desire than hostility.

Ailis Robertson wanted a husband, not a savage—but when her family was faced with a deadly ultimatum, she had no choice. How can she fight her fate when the union of a MacPherson and a Robertson could end three generations of hostilities between the two families? Perhaps bitter rivals can become something more when they start to recognize that they're not so different after all...

It surely was. The moon was full and looked like a glowing ball across the lake. All of the stars were in view, but without the harshness of biting wind.

Bhaic wasn't looking at the view. He was watching her. She turned her face toward his, drawn to the husky promise in his voice...