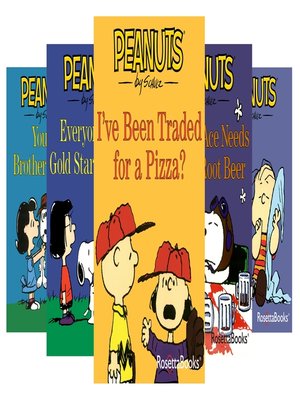 You Have a Brother Named Spike: Snoopy's brother Spike is coming for a visit—and the Peanuts gang is going crazy with curiosity. But Spike's no pampered house pet—he's a skinny dog who's been living in the desert with a gang of coyotes! Soon Spike has taken over Linus' bed—and Lucy is on a mission to fatten him up, with hilarious results.

Everyone Gets Gold Stars But Me: Miss Tenure gives out gold stars to everybody. She gives them out for good spelling, attendance, and even for drinking milk. But Peppermint Patty has never gotten a gold star—and she wants one. When the teacher's box of treasured gold stars goes missing, Peppermint Patty is the main suspect. She enlists the help of Snoopy, the "world-famous attorney," and goes undercover. She's determined to find the real culprit and earn a gold star fair and square.

A Flying Ace Needs Lots of Root Beer: Snoopy, The World War I Flying Ace, finds refuge from the war in a little French café (a.k.a. Marcie's house). A bemused Marcie lets Snoopy take over her house—until he drinks all her root beer and makes a mess with the empty mugs. Can Marcie get Snoopy to go back to Charlie Brown and his doghouse, and can the World War I Flying Ace evade the Red Baron?

I've Been Traded for a Pizza: Lucy and Marcie both play right field on competing baseball teams—and they're both terrible at it. So their team captains, Charlie Brown and Peppermint Patty, negotiate a trade. Charlie Brown agrees to trade Lucy for Marcie, as long as Peppermint Patty will throw in a pizza. The trade doesn't exactly go as expected—but that doesn't stop Charlie Brown from eating the pizza!

My Best Friend, My Blanket: Against all odds, Linus has finally managed to put down his beloved security blanket for good. Feeling empowered by his success, he opens a clinic to help other children give up their own blankets. He's in for a surprise, though—as his first client, Randolph, is not exactly what he seems.