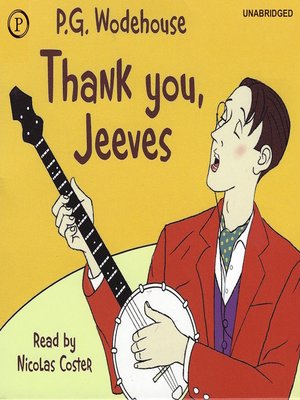 P. G. Wodehouse is considered one of the greatest British humorists of the twentieth century and here is his first novel-length work featuring the incomparable valet, Jeeves, and his hapless charge, Bertram "Bertie" Wooster. Wodehouse's main goal in creating these characters was to ironize the decaying British aristocracy. Jeeves is the stereotype of a British butler, always loyal and far cleverer than his patron, banjo-playing Bertie, a typical wealthy aristocrat who never worked in his life. The story begins when Bertie's disastrous banjo playing not only results in his eviction but also triggers Jeeves' resignation. Bertie then escapes to the country chalet of his chum Lord "Chuffy" Chuffnell, who naturally employs the services of the recently resigned Jeeves. Along the way, we meet a memorable cast of characters including Bertie's ex-fiancée Pauline, her formidable father, and the eminent loony doctor, Sir Roderick Glossop. When Chuffy falls in love with Pauline, chaos ensues...until Jeeves steps in to save the day.