You Know You're a Republican/Democrat If . . . 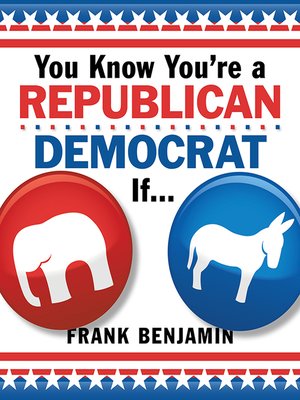 This updated, third edition laugh-out-loud take on partisan stereotypes skewers both sides of the political aisle with equal glee. The follies and foibles that make the political world spin will trigger guffaws and giggles—no matter which party you call your own.

You Know You're a REPUBLICAN If...

• You think Glenn Beck and Rush Limbaugh are intellectual powerhouses, and you've learned much from their wisdom.

• You've accepted that global warming is real, but you don't believe we should recklessly raise taxes to fix it. You have, however, invested in future beachfront property—twenty miles inland.

You Know You're a DEMOCRAT If...

• Everything you know about politics you learned from Jon Stewart and Stephen Colbert.

• You're philosophically appalled by corporate America's emphasis on profits, but you sure were ticked off when your retirement investments tanked.

Politics Nonfiction Humor (Nonfiction)
You Know You're a Republican/Democrat If . . .