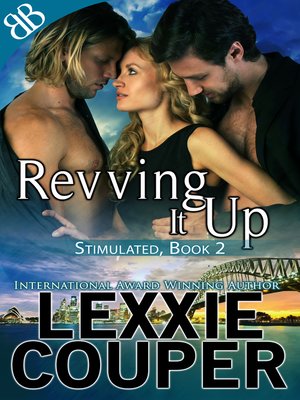 View more libraries...
Re-release.
"Lady and Gentlemen...start your engines!"
Revving It Up, by award winning erotic romance author Lexxie Couper, is a fast paced thrill ride. A handsome pro racer, a sexy mechanic, and a spirited motocross racer rev up the heat in this contemporary menage romance.
Tell Sami Charlton men are better than women at motocross racing and you're bound to lose a testicle. She's not the National Champion because she's a pretty face with a hot bod. In fact, Sami is the best rider Australia has ever seen. She's also feisty, rebellious, prone to sarcasm, and never looks before she leaps. Like, ever.
Jay Rutledge, Team Charlton's Head Mechanic, has kept his desire for Sami a secret since he joined her team. It's not always easy, but thankfully Sami is more interested in riding bikes than men. He spends his days making sure the vibrations between her legs are from a perfectly tuned engine and keeps the desire thrumming through his own body in neutral. Just.
Until International Motocross champion, Eli Swanson makes his move.
Eli always gets what he wants, and he wants Sami. In every way. The trouble is, Eli declared in an interview women aren't as good as men at motocross and now all she wants from him is his balls. But when Sami bets anything she can beat him on live television, Eli knows the god of arrogant motocross champions is smiling on him. He takes Sami up on her bet...and doesn't plan to lose. He hadn't however, planned on dealing with Jay, a man he used to—once upon a time—share everything with.
Sami thought the only real pleasure in her life came from racing. She was wrong.
This contemporary erotic novella contains a hot Aussie mechanic who knows how to handle his tools, a hot American pro-racer who know how to ride hard and long, and a feisty heroine with a gutter-mouth who talks herself into a hot, sweaty, throbbing situation with them both. Revving It Up is not intended for readers under the age of 18. I'm not kidding.
Previously published: (2015) 5x5 Publishing

Fiction Romance Suspense
Revving It Up