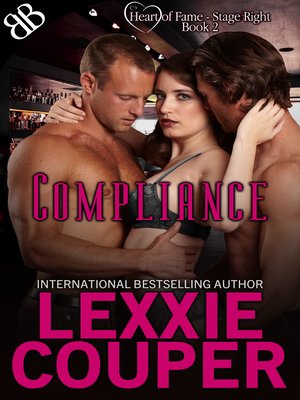 View more libraries...
Because the first time we met them, it wasn't their turn...
Who will win the lady's heart...the jock or the self-made billionaire?
Find out in this erotic ménage romance from international bestselling contemporary romance author Lexxie Couper. Compliance is Book 2 in Lexxie's bestselling Heart of Fame - Stage Right series. When the competition heats up, the nerd and the jock soon discover the lady has other ideas.
Courage is sexy...
The last time Bethany Sloan was in Australia, she helped two guys fall in love with each other. This time, it looks like she's about to be responsible for two guys beating the hell out of each other. Not exactly how she'd planned to spend her long-overdue vacation, that's for sure. Especially when what she'd really like to do is have wild, wicked sex with both of them. At the same time. Because a threesome with a sexy nerd and a sexy jock is her idea of a perfect fantasy. And then her heart gets involved. Damn it...
IT guru and self-made billionaire Logan Hill wants the hot little American who strides into his best mate's bar the second he lays eyes on her. The trouble is, his best mate—and the man who once saved Logan's life—falls instantly in lust with her as well. Logan would give his right arm for Curtis, but the moment Bethany Sloan smiles at them both, Logan is a goner. Sometimes a nerd's got to get the girl, right?
Curtis Clarkson never pulls punches. And he always gets what he wants. It's been that way since he was the captain of the school's cricket team, and has been that way ever since. Retired from captaining the Australian cricket team, Curtis spends most of his time running his bar. When your life is a scrutinized by the media as his is, sexual relationships bring nothing but trouble. And then the sexy American tourist walks into his club, with her sexy accent and her sexy attitude, and Curtis wonders if it's time to rethink that stance. But what the hell does he do when introverted, woman-shy Logan makes it clear he's interested in Bethany as well?
Bethany's got a solution. One neither guy has considered. One beneficially pleasurable to all. She's just got to convince them to see things her way. After all, two hot Aussie guys are better than one at going Down Under...
*Not intended for readers under the age of 18.
*Previously Published: (2014) 5x5 Publishing.