The Secret of High Eldersham 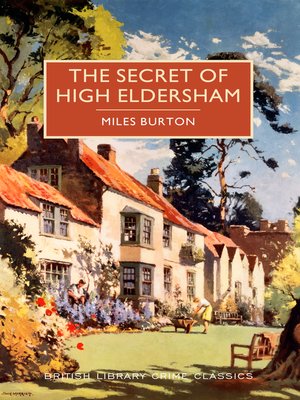 "First published in 1930, this entry in the British Library Crime Classics series evokes a time when stouthearted chaps did their duty for king and country, and the village had only one telephone." —Publishers Weekly

'They're terrible mistrustful of strangers in these parts.'

Samuel Whitehead, landlord of the Rose and Crown, is a stranger in the lonely East Anglian village of High Eldersham. When the newcomer is stabbed to death in his pub, and Scotland Yard is called to the scene, it seems that the veil dividing High Eldersham from the outside world is about to be lifted.

Detective-Inspector Young forms a theory about the case so utterly impossible that merely entertaining the suspicion makes him doubt his own sanity. Surrounded by sinister forces beyond his understanding, and feeling the need of rational assistance, he calls on a brilliant amateur and 'living encyclopedia', Desmond Merrion. Soon Merrion falls for the charms of a young woman in the village, Mavis Owerton. But does Mavis know more about the secrets of the village than she is willing to admit?

Burton's best novels are fast-paced and crisply told, and The Secret of High Eldersham—which uncovers ancient secrets in sleepy rural England—is among the most entertaining of all his crime stories.