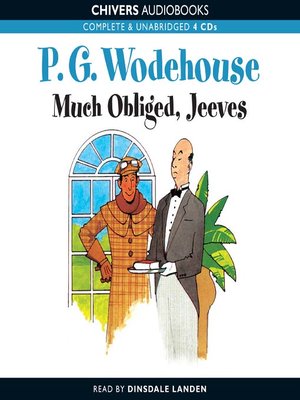 Everyone - even Augustus the cat - has cause to be obliged to Jeeves when he manages to retrieve the infamous Book - the book which lays bare the private lives of three-quarters of the upper classes. And which could prove to be political dynamite at the Market Snodsbury by-election.

P. G. Wodehouse was born in 1881 and died in 1975 on St Valentine's Day, only weeks after being knighted. He is most famous for the creation of Jeeves and Wooster

Dinsdale Landen was a veteran of British stage, TV and film. His acting spanned five decades and his TV credits included The Inspector Lynley Mysteries, The Buccaneers, All Creatures Great and Small, Doctor Who and Lovejoy. On stage, he appeared as Sir Toby Belch in Sir Peter Hall's production of Twelfth Night and Lancelot Gobbo in the RSC's The Merchant Of Venice. He also earned an Olivier Award nomination for his role in Michael Frayn's West End play Alphabetical Order. Dinsdale Landen died in 2003.