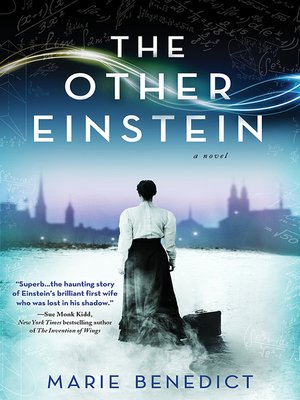 From beloved New York Times and USA Today bestselling author Marie Benedict comes the story of a not-so-famous scientist who not only loved Albert Einstein, but also shaped the theories that brought him lasting renown.

In the tradition of Beatriz Williams and Paula McClain, Marie Benedict's The Other Einstein offers us a window into a brilliant, fascinating woman whose light was lost in Einstein's enormous shadow. This novel resurrects Einstein's wife, a brilliant physicist in her own right, whose contribution to the special theory of relativity is hotly debated. Was she simply Einstein's sounding board, an assistant performing complex mathematical equations? Or did she contribute something more?

Mitza Maric has always been a little different from other girls. Most twenty-year-olds are wives by now, not studying physics at an elite Zurich university with only male students trying to outdo her clever calculations. But Mitza is smart enough to know that, for her, math is an easier path than marriage. Then fellow student Albert Einstein takes an interest in her, and the world turns sideways. Theirs becomes a partnership of the mind and of the heart, but there might not be room for more than one genius in a marriage.

Marie Benedict illuminates one pioneering woman in STEM, returning her to the forefront of history's most famous scientists.

"The Other Einstein takes you into Mileva's heart, mind, and study as she tries to forge a place for herself in a scientific world dominated by men."—Bustle

Other Bestselling Historical Fiction from Marie Benedict:
The Mystery of Mrs. Christie
The Only Woman in the Room
Lady Clementine
Carnegie's Maid