Jeeves and the Feudal Spirit 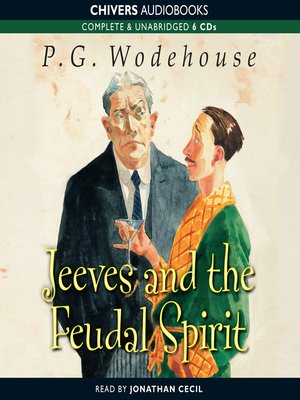 When Jeeves returns from his annual shrimping holiday in Bognor Regis, he's in for a few surprises.Down at Brinkley Court, Aunt Dahlia is trying to persuade the publishing magnate L. G. Trotter to buy her magazine, M'Lady's Boudoir. Trotter's nephew, the whiskered Percy Gorringe, is head over heels about Florence Craye whose engagement to Stilton Cheesewright has just been called off. Florence is convinced that Bertie wants to marry her and Stilton wants to break his spine in six places. To top it all, there is ill-feeling in the Wooster home over Bertie's attempts to grow a moustache!

P. G. Wodehouse was born in 1881 and died in 1975 on St Valentine's Day, only weeks after being knighted. He is most famous for the creation of Jeeves and Wooster.

Jonathan Cecil is a vastly experienced actor, appearing at Shakespeare's Globe as well as in such West End productions as The Importance of Being Earnest, The Seagull and The Bed Before Yesterday. He has toured in The Incomparable Max, Twelfth Night and An Ideal Husband, while among his considerable TV and film appearances are The Rector's Wife, Just William, Murder Most Horrid and As You Like It.