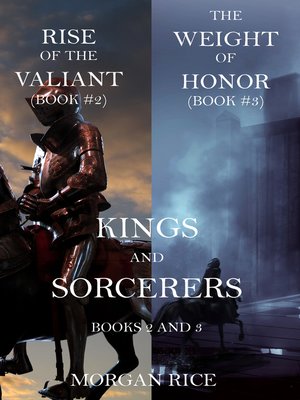 A bundle of books 2 and 3 in Morgan Rice's #1 Bestselling fantasy series KINGS AND SORCERERS (RISE OF THE VALIANT and THE WEIGHT OF HONOR). Here are two bestselling novels, all in one convenient file.

In RISE OF THE VALIANT, Kyra is sent on an urgent quest: to cross Escalon and seek out her uncle in the mysterious Tower of Ur. The time has come for her to learn about who she is, who her mother is, and to train and develop her special powers. Her father, Duncan, must lead his men south, to the great water city of Esephus, to attempt to free his fellow countrymen from the iron grip of Pandesia. Alec escapes with Marco from The Flames to find himself on the run through the Wood of Thorns, chased by exotic beasts. Merk, despite his better judgment, turns back to help the girl, and finds himself, for the first time in his life, entangled in a stranger's affairs. Vesuvius spurs his giant as he leads the Trolls on their mission underground, attempting to bypass The Flames, while the dragon, Theos, has his own special mission on Escalon.

In THE WEIGHT OF HONOR, Kyra finally meets her cryptic uncle, and is shocked to discover he is not the man she expected. She embarks on a period of training which will test her stamina and her frustration, as she soon encounters the limits of her power. Duncan must descend the peaks of Kos with his new army and, vastly outnumbered, launch a risky invasion on the capital. If he wins, waiting behind its ancient walls, he knows, will be the old king and his nest of nobles and aristocrats, all with their own agendas, all of them as quick to betray as they are to embrace. Alec, in Ur, must tap his unique skills in the forge to aid the resistance if they have any chance of defending against the looming Pandesian invasion. Merk finally enters the tower of Ur, and is stunned by what he discovers. Vesuvius leads his Troll nation across a vulnerable Escalon, devastating the land, while Theos, enraged at what becomes of his son, is on a rampage himself, and will not stop until all of Escalon is aflame.

With its strong atmosphere and complex characters, KINGS AND SORCERERS is a sweeping saga of knights and warriors, of kings and lords, of honor and valor, of magic, destiny, monsters and dragons. It is fantasy at its finest, inviting us into a world that will live with us forever, one that appeals to all ages and genders.