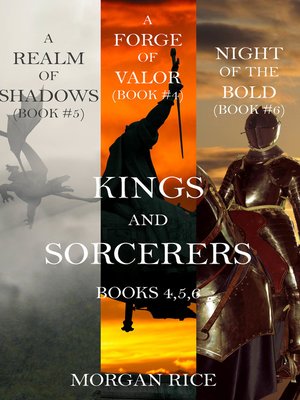 A bundle of books #4 (A FORGE OF VALOR), #5 (A REALM OF SHADOWS) and #6 (NIGHT OF THE BOLD) in Morgan Rice's #1 Bestselling fantasy series KINGS AND SORCERERS, comprising 6 books. The series begins with RISE OF THE DRAGONS (Book #1), a free download on Amazon with over 500 five star reviews!

In A FORGE OF VALOR, Kyra slowly returns from the verge of death, healed by Kyle's love and mysterious power. As he sacrifices for her, she regains her strength—yet not without a price. She presses Alva for the secret of her lineage, and he finally reveals all about her mother. Aidan, Motley at his side, strives to rescue his father, trapped in the perilous capital, while in the far corner of the kingdom, Merk, amazed by what he discovers in the Tower of Ur, braces himself against a massive troll invasion. Dierdre finds herself facing a full-fledged Pandesian invasion in her embattled city of Ur.

In A REALM OF SHADOWS, Kyra finds herself in the midst of a burning capital, attacked by a host of dragons, clinging for life. With her beloved homeland destroyed, The Flames down and the trolls pouring in, Kyra must urgently quest to Marda to retrieve the magic weapon before it is too late—even if it takes her into the very heart of darkness. Duncan finds himself trapped, with the others, in the burning capital, and he uses all his wits to find his men, attempt escape, and rally his forces to regroup and attack Pandesia. Across the kingdom, Merk sails with King Tarnis' daughter through the Bay of Death as they abandon the Tower of Kos and sail for the warrior isle of Knossos.

In NIGHT OF THE BOLD, Kyra must find a way to free herself from Marda and return to Escalon with the Staff of Truth. If she does, awaiting her will be the most epic battle of her life, as she will need to face off against Ra's armies, a nation of trolls, and a flock of dragons. If her powers, and the weapon, are strong enough, her mother awaits her, ready to reveal the secrets of her destiny, and of her birth.

With its strong atmosphere and complex characters, KINGS AND SORCERERS is a sweeping saga of knights and warriors, of kings and lords, of honor and valor, of magic, destiny, monsters and dragons. It is fantasy at its finest, inviting us into a world that will live with us forever, one that appeals to all ages and genders.