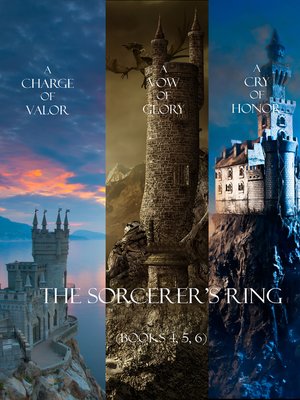 This bundle includes the next three books in Morgan Rice's #1 Bestselling fantasy series THE SORCERER'S RING (A CRY OF HONOR, A VOW OF GLORY and A CHARGE OF VALOR). These three bestselling novels are all here in one convenient file and offer a great next step deeper into the world of the SORCERER'S RING series. Over 200,000 words of reading, all for an incredible price! It is a great deal, and it also makes the perfect gift!

THE SORCERER'S RING series tells the epic tale of the coming of age of Thorgrin, a special 14 year old boy, the least loved of his father, as he strives to become a warrior in the magical Kingdom of the Ring, and as he learns he has powers, and a destiny, he does not understand. An outsider, he must fight for acceptance as he strives to join the King's elite Legion, and as he falls in love with the king's 16 year old daughter. Most of all, he must learn who he really is, why his destiny is so important, and why the entire fate of The Ring depends on him.

In Books #4, #5 and #6, the tale continues. In A CRY OF HONOR (Book #4 in the Sorcerer's Ring), Thor has returned from The Hundred as a hardened warrior, and now he must learn what it means to battle for his homeland, to battle for life and death. The McClouds have raided deep into MacGil territory—deeper than ever before in the history of the Ring—and as Thor rides into an ambush, it will fall on his head to fend off the attack and save King's Court.

In A CHARGE OF VALOR (Book #6 in the Sorcerer's Ring), Thor continues on his quest, deeper into the Empire, to retrieve the stolen Destiny Sword and save the Ring. As he and his friends meet unexpected tragedy and lose a member of their close-knit group, Thor and his remaining friends become closer than they ever were, learning that they must face and overcome adversity together. Their journey takes them to new and exotic terrains, including the desolate Salt Fields, the Great Tunnel, and the Mountains of Fire, as they face a host of unexpected monsters at every turn.

With its sophisticated world-building and characterization, THE SORCERER'S RING is an epic tale of friends and lovers, of rivals...