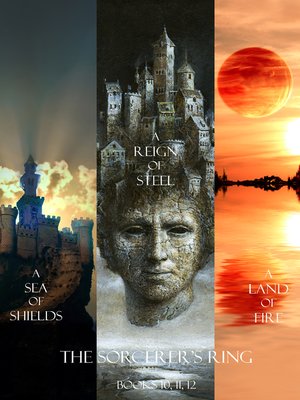 This bundle includes books #10, #11 and #12 (A SEA OF SHIELDS, A REIGN OF STEEL and A LAND OF FIRE) in Morgan Rice's #1 Bestselling fantasy series THE SORCERER'S RING. These three bestselling novels are all here in one convenient file and offer a great step deeper into the world of the SORCERER'S RING series. Over 200,000 words of reading, all for an incredible price! It is a great deal and makes the perfect gift!

THE SORCERER'S RING series tells the epic tale of the coming of age of Thorgrin, a special 14 year old boy, the least loved of his father, as he strives to become a warrior in the magical Kingdom of the Ring, as he learns he has powers and a destiny he does not understand. An outsider, he must fight for acceptance as he strives to join the King's elite Legion, and as he falls in love with the king's 16 year old daughter. Most of all, he must learn who he really is, why his destiny is so important, and why the fate of the Ring depends on him.

In Books #10, #11 and #12, the saga deepens. In A SEA OF SHIELDS (Book #10), Gwendolyn gives birth to a child, amidst powerful omens. With a son born to them, Gwendolyn and Thorgrin's lives are changed forever, as is the destiny of the Ring; Reece, despite himself, falls in love with his cousin, a love affair which will threaten the entire Ring; and Romulus, in the Empire, discovers a new form of magic which may just destroy the Shield for good.

In A REIGN OF STEEL (Book #11), Gwendolyn must protect her people as she finds King's Court under siege; Romulus invades with his host of dragons; Erec and Alistair journey to the Southern Isles; and Thor embarks on the quest of his life in the Land of the Druids, trekking across a fearsome and magical land to try to reach his mother.

In A LAND OF FIRE (Book #12), Gwendolyn is determined to find her baby, lost at sea, and to save her people and lead her nation-in-exile to a new home. She travels across foreign and exotic seas, encountering unthinkable dangers, rebellion and starvation, as they sail for dream of a safe harbor. Thorgrin finally meets his mother in the Land of the Druids, and their meeting will change his life forever, as there follows an epic battle of dragons and of men.