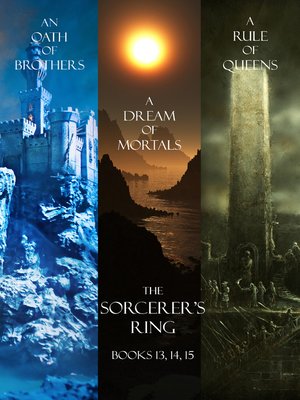 A bundle of books #13, #14 and #15 (A RULE OF QUEENS, AN OATH OF BROTHERS, A DREAM OF MORTALS) in Morgan Rice's #1 Bestselling fantasy series THE SORCERER'S RING—which begins with A QUEST OF HEROES (book #1)—a free download! These three bestselling novels, all here in one convenient file, bring us ever deeper into the world of the SORCERER'S RING. Over 200,000 words of reading, all for an incredible price, and it makes a great deal and the perfect gift!

In A RULE OF QUEENS (Book #13), Gwendolyn leads the remains of her nation in exile as they sail into the hostile harbors of the Empire. Thor, determined to rescue Guwayne, continues with his Legion brothers on his quest far across the sea, to the massive caves that herald the Land of the Spirits, encountering unthinkable monsters. Darius risks it all to save the love of his life, Loti, even if he must face the Empire alone. And Volusia continues her rise, to consolidate her hold on the Empire and become the ruthless Goddess she years to be.

In AN OATH OF BROTHERS (Book #14), Thorgrin and his brothers emerge from the Land of the Dead more driven than ever to find Guwayne, and set sail across a hostile sea, leading them to places beyond their wildest dreams. Darius stands up to the Empire, boldly waging a guerilla war, amassing an army, as one freed slave village after the next rallies to his cause. Gwendolyn leads her people into the Great Waste, deeper into the Empire than anyone has ever journeyed, on a quest to find the legendary Second Ring—the last hope for survival. Godfrey finds himself deep inside the city of Volusia and deep in trouble as his plan goes from bad to worse. Volusia forges a pact with the darkest of sorcerers, and driven to even greater heights, she continues her ascent, marching all the way to the Empire capital.

In A DREAM OF MORTALS (Book #15), Thorgrin and his brothers struggle to break free from the grips of the pirates, and to continue their search for Guwayne at sea. Darius and his few friends survive the massacre of their people—but only to find themselves thrown into the Empire Arena. Gwendolyn wakes from her slumber to discover that she has survived the trek across the Great Waste—and even more shocking, that they have arrived in a land beyond their wildest imagination. Erec and Alistair, still captive at sea, struggle to break free from the grips of the Empire fleet in a bold and daring nighttime escape. Volusia is surrounded on all sides as she strives to take and hold the Empire capital—and she will have to summon a more powerful magic than she's ever known if she is to prove herself a Goddess, and become Supreme Ruler of the Empire.

With its sophisticated world-building and characterization, THE SORCERER'S RING is an epic tale of friends and lovers, of rivals and suitors, of knights and dragons, of intrigues and political machinations, of coming of age, of broken hearts, of deception, ambition and betrayal. It is a tale of honor and courage, of...