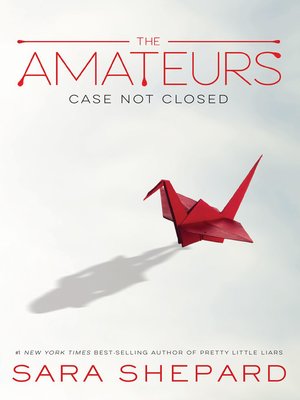 View more libraries...
Five years ago, high school senior Helena Kelly disappeared from her backyard in Dexby, Connecticut, never to be heard from again. Her family was left without any answers — without any idea who killed Helena, or why.
So when eighteen-year-old Seneca Frazier sees a desperate post on the Case Not Closed message board, she knows it's time to change that. Helena's high-profile disappearance is the one that originally got Seneca addicted to true crime. It's the reason she's a member of the site in the first place.
Determined to get to the bottom of the mystery, she agrees to spend spring break in Connecticut working on the case with Maddy Wright, her friend from Case Not Closed. However, the moment she steps off the train, things start to go wrong. Maddy's nothing like she expected, and Helena's sister, Aerin, doesn't seem to want any help after all. Plus, Seneca has a secret of her own, one that could derail the investigation if she's not careful.
Alongside Brett, another super-user from the site, they slowly begin to unravel the secrets Helena kept in the weeks before her disappearance. But the killer is watching . . . and determined to make sure the case stays cold.
#1 New York Times best-selling author Sara Shepard is back with The Amateurs, first in a gripping new series packed with scandalous twists, shocking betrayals, and sizzling romance.
"Shepard . . . unravels the truth, the author lulls readers into a false sense of security before expertly pulling the rug out from underneath them. This is a delicious start to the Amateurs series." -Publishers Weekly, starred review
"A twisty and ultimately satisfying romantic whodunit." -Kirkus Reviews
"[L]ikely to reach best-seller status." -Booklist
"A delicious and suspenseful page-turner. I want more!" -I. Marlene King, Executive Producer, Pretty Little Liars
"Chilling and romantic and full of surprises." -Cecily von Ziegesar, New York Times best-selling author of the Gossip Girl series
"Long live the queen of secrets! The Amateurs is a dark and twisty thriller which might just fill the Pretty Little Liars shaped hole in my heart!" -Danielle Paige, New York Times best-selling author of Dorothy Must Die
"Deceitful and delicious!" — Kami Garcia, #1 New York Times best-selling coauthor of Beautiful Creatures and author of The Lovely Reckless
"It's clear that Sara Shepard is no amateur; her devious and thrilling twists will leave you frantically turning pages until the very last moment." — Kass Morgan, New York Times best-selling author of The 100 series