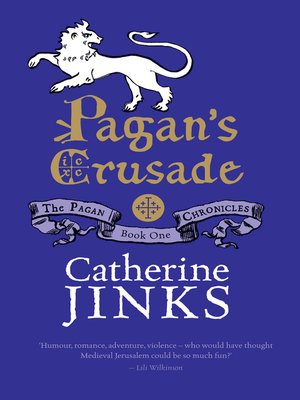 Pagan's Crusade is the first of five books in the Pagan Chronicles. ;'Humour, romance, adventure, violence - who would have thought Medieval Jerusalem could be so much fun?'- Lili Wilkinson, Centre for Youth Literature

Wham! So here I am, standing in a sea of dirt, with a big mad Templar

lobbing rocks at my head. Wham! Like some kind of martyr. Wham! He throws like a catapult.

'All right, Pagan, that's enough.' (I should damn well think so.) 'Do you see what your problem is?'

It's twelfth-century Jerusalem, the time of the Crusades. Shrewd and scrappy Pagan has been plucked from the streets to work for Lord Roland, a Templar knight. Set against a background of mounting tension as Saladin's infidels close in on the Holy City, Pagan's Crusade is an exciting and exuberant tale

Catherine Jinks masterfully intertwines thrilling action with a deeply personal story as Roland emerges as both mentor and friend for the orphaned Pagan. An engaging, moving and thoroughly satisfying experience.

'What a romp! Not since Don Quixote took up with Sancho Panza has a knight had a squire like Pagan Kidrouk.' - Voice of Youth Advocates