How to Rope a Giganotosaurus 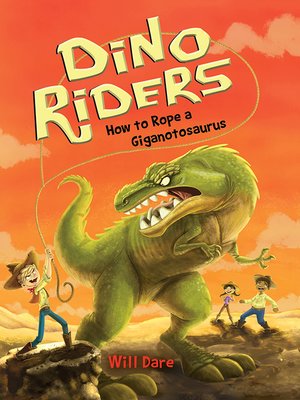 Josh Sanders will do whatever it takes to become the next great dinosaur cowboy! He's pretty confident in his skills-after all, he did win this year's Settlement Race with Charge, his speed-demon of a triceratops.

So when news breaks that legendary dino-wrangler Terrodactyl Bill has captured a T-rex, it's clear to Josh that it's time to follow in the footsteps of his personal hero. But how the heck is he supposed to top nabbing a T-rex?

After a little brainstorming (and a lot of iguanodon herding) Josh knows what he has to do-bag himself a giganotosaurus, the biggest, baddest meat-eater in existence! Josh may have Charge and best friends Abi and Sam on his side, but this will be no easy feat. It's gonna take a whole lotta courage (and rope) to pull this one off...

This wildly entertaining new chapter book series for ages 7 and up features exciting illustrations and real dino facts! A great way to get kids reading.

Juvenile Fiction Juvenile Literature
How to Rope a Giganotosaurus