ebook ∣ The Unbelievable True Story of How I Wrote, Sold and Published This Very Book 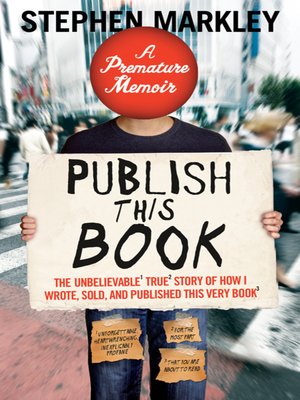 Dear Reader-
This is called the "back cover copy," and you are no doubt familiar with its purpose. It describes what the book is about, so you can decide if you want to read it.

Here's the problem, though: I can't even describe this book, and I wrote the damn thing.(1)

Of course, now you're saying to yourself, "That is stupid," which is fair. But then you'll read it, and you'll say, "Damn, that was actually pretty good."

Because obviously it's about much more than just publishing a book. It's about life and love and friendship; politics, pop culture, and basketball; sex, drugs, and mild, inoffensive, slow-tempo Christian rock.(2)

It's about the pitfalls of narrating your life as it unfolds, freaking out when an agent actually (spoiler alert!) takes an interest in this bizarre experiment, and the surreal shock you undergo when a publisher actually buys it(3) and you suddenly realize that every secret drunk, drug, and sex story you've related will now be required reading for your parents, aunts, ex-girlfriends, and thousands of strangers who-you were kind of hoping-would never find out that you once accidentally shut your penis in a dresser drawer.(4)

And finally, but most importantly, it's about those tumultuous early years of adulthood-the years when hope and fear and rage broil together and the promise of youth still holds the capacity to inspire awe. This is a story of those struggles-to find your true voice in your work and in your life. And the best part?

You pretty much know it has a happy ending.(5) 2 It is not really about that last one.

3 And then later makes you write your own back cover copy even though you clearly do not know what you're doing.

4 Although I'll dodge a bullet there because I totally left that story out of the book.

5 Except for what happens to the puppy at the fertilizer plant. I admit, that part is kind of a downer.