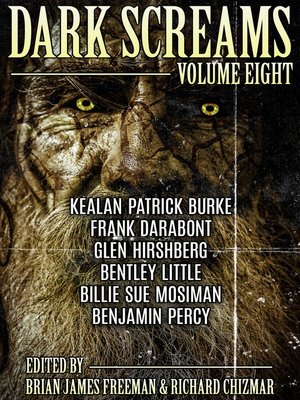 WALPUSKI’S TYPEWRITER by Frank Darabont
They say that genius is ten percent inspiration and ninety percent perspiration. For Howard Walpuski, it’s an IBM Selectric II typewriter, a nefarious secret, and a whole lot of blood.

THE BOY by Bentley Little
Christine has found the perfect neighborhood to raise her family: a quaint, quiet, friendly place where everyone gets along. Everyone, that is, except for the boy.

TUMOR by Benjamin Percy
He dodged death in the nick of time when the golf ball-sized tumor was surgically removed from his head. But the tumor isn’t done with him.

TWISTED AND GNARLED by Billie Sue Mosiman
He’s smart. Smarter than anyone knows. No one has linked him to the string of bodies he’s left up and down the California coast. Only one woman has ever come close—and she’s no match for his intellect.

THE PALAVER by Kealan Patrick Burke
It’s time for Oscar Dennihy to close his failing barber shop and retire—until a mysterious customer tells him a truly hair-raising tale . . . and gives Oscar a wonderful and terrible new purpose.

INDIA BLUE by Glen Hirshberg
Like most Americans, Enrico never gave much thought to the sport of cricket. Not until America’s Rockin’ Professional Cricket game—a spectacle that will live forever in his most horrible nightmares.

“Another entry in the . . . excellent Dark Screams series.”—Char’s Horror Corner