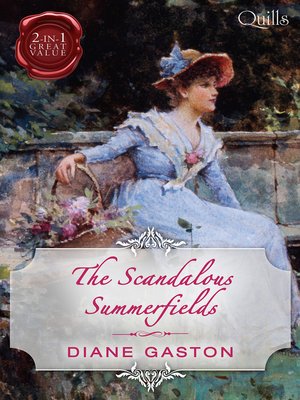 Tess Summerfield's life is changed forever when she's rescued from drowning by the mysterious Marc Glenville. Forced to find shelter in a deserted cottage, she spends the night wrapped in his arms for warmth.

When they are discovered the tongues of the ton start wagging and Marc knows the only way to silence them is to marry Tess. But his duties as a spy soon tear Marc away from the marriage bed. When they're at last reunited, can they rekindle the flame born from the ashes of scandal?

Bound By One Scandalous Night

On the eve of battle, Lieutenant Edmund Summerfield rescues mysterious Amelie Glenville from attack by marauding soldiers. Heady from the anticipation and uncertainty in the air, they spend the night together, but their scandalous actions have one inescapable consequence...!

The illegitimate son of an aristocrat, Edmund won't consign his unborn child to the same fate, so he offers Amelie marriage. With a honeymoon spent weathering a storm of scandal, can these two strangers hope to turn their convenient marriage into something real?