The Red Cross Knight--Stories from the Faerie Queene Book I

By Retold by Mary Macleod 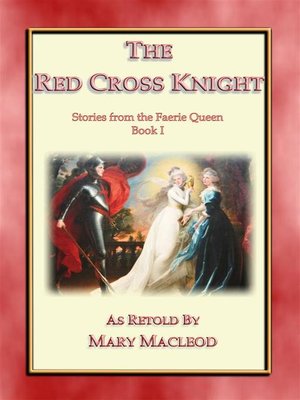 Queen Gloriana ruled over a magnificent land, a rich and beautiful country. In her court she had 12 chief knights. Each of her 12 chief knights was known as the Champion of some virtue. Thus Sir Guyon was the representative of Temperance, Sir Artegall of Justice, Sir Calidore of Courtesy, and others took up the cause of Friendship, Constancy, and so on.

During a great feast, which lasted 12 days, a stranger in poor clothes came to the court, and, falling before the Queen, begged a favour of her. It was always the custom at these feasts that the Queen should refuse nothing that was asked, so she bade the stranger say what it was he wished. Then he besought that, if any cause arose which called for knightly aid, the adventure might be entrusted to him. When the Queen had given her promise he stood quietly on one side.

Soon after this there rode into the city a fair lady on a white ass. Behind her came her servant, a dwarf, leading a warlike horse that bore the armour of a knight. The face of the lady was lovely, but it was very sorrowful. Making her way to the palace, she fell before Queen Gloriana, and implored her help. She said that her name was Una; she was the daughter of a king and queen who formerly ruled over a mighty country; but, many years ago, a huge dragon came and wasted all the land, and shut the king and queen up in a brazen castle, from which they might never come out. The Lady Una therefore besought Queen Gloriana to grant her one of her knights to fight and kill this terrible dragon.

Then the stranger sprang forward, and reminded the Queen of the promise she had given. At first she was unwilling to consent, for the Knight was young. However, the Queen kept her word and consented. He was given an old suit of armour upon which was a red cross, and was quickly named the Red Cross Knight.

So the stranger and Una rode forth into the world together, while a little way behind followed their faithful attendant, Prudence. And now you shall hear some of the adventures that befell the Red Cross Knight and his two companions.