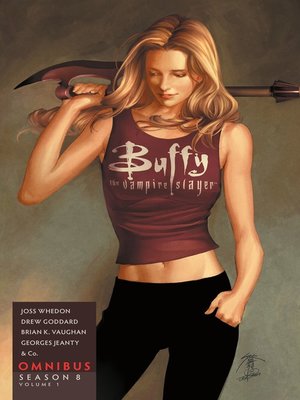 View more libraries...
Series creator Joss Whedon brought Buffy the Vampire Slayer back to life with this comics-only follow-up to Season 7 of the television show. Aptly named Season 8, these comics are the official sequel to Buffy and continue where the live-action series left off with the Slayer, her friends, and their ongoing challenge to fight the forces of darkness.
After the destruction of the Hellmouth, the Slayers—newly legion—have gotten organized, but it's not long before new and old enemies begin popping up. Buffy, Xander, Willow, and a very different Dawn are introduced to the season's big bad, Twilight, and begin to understand the incredible reach of this mysterious threat. Meanwhile, rebel Slayer Faith teams up with Giles to handle a menace on the other side of the Atlantic. It's a dirty job, and Faith is just the girl to do it! Then, as Twilight's ominous influence continues to expand Buffy and her Slayers travel to Tokyo to face a new kind of vampire with powers they've only witnessed in Dracula . . . And, when trouble with Buffy's scythe comes to light, Willow and Buffy head to New York to investigate the secrets behind the ancient weapon; ever full of the unexpected, Buffy is transported to a dystopian future where her first chance meeting is with Fray, future Slayer!
This oversized omnibus edition is one of two volumes that will contain the entirety of Season 8. It includes the first four arcs of the series along with one-shots and short stories written by Joss Whedon, Brian K. Vaughan, Drew Goddard, and Jeph Loeb, with art by the acclaimed Georges Jeanty, as well as Karl Moline, Paul Lee, Cliff Richards, and more.
"Joss Whedon, the man, the myth, the legend, writes the comic with the same genius as he did the show. The art, penciled by Georges Jeanty, is as faboo as the writing."—Janet Evanovich, New York Times best-selling author of Hard Eight

"Buffy the comic might be every bit as good as Buffy the TV show."—Entertainment Weekly (featured as one of the Best Comics of 2007)
"Vaughan is a fantastic writer that conveys emotion and character to a degree of perfection."—Wired

"Buffy Season 8 is run like the television series from which it came . . . a classic evolving specimen for this era of ever shifting media platforms."—Los Angeles Times