Harry Potter and the Cursed Child: Parts One and Two 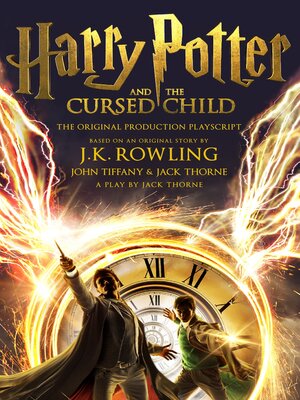 The official playscript of the original West End production of Harry Potter and the Cursed Child.
It's been nineteen years since Harry Potter, Ron Weasley, and Hermione Granger saved the wizarding world, and now they're back on a most extraordinary adventure, joined by a brave new generation that's only just arrived at Hogwarts School of Witchcraft and Wizardry. While Harry grapples with a past that refuses to stay where it belongs, his youngest son, Albus, struggles with the weight of a family legacy he never wanted. As past and present collide, both father and son are locked in a race through time as they battle mysterious forces, all while the future hangs in the balance.
Based on an original story by J.K. Rowling, John Tiffany, and Jack Thorne, Harry Potter and the Cursed Child is the complete and unabridged playscript of the award-winning West End production. This edition includes the final dialogue and stage directions of the original, two-part play, a conversation piece between director John Tiffany and playwright Jack Thorne, the Potter family tree, and a timeline of key events in the wizarding world leading up to Harry Potter and the Cursed Child.