ebook ∣ Or, the Hidden Self · Givens Collection 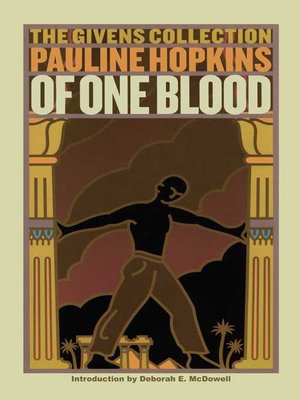 View more libraries...
"Mysticism, horror, and racial identity merge fluidly in this thrilling tale of love, obsession, and power" (Publishers Weekly) written by one of the lesser-known literary figures of the much-lauded Harlem Renaissance.
Pauline Hopkins is considered by some to be the most prolific African-American woman writer and the most influential literary editor of the first decade of the twentieth century, and Of One Blood is the last of four novels she wrote.

Mixed-race medical student Reuel Briggs doesn't give a damn about being Black and cares less for African history. When he arrives in Ethiopia on an archeological trip, his only interest is to raid as much of the country's lost treasures as possible so that he can make big bucks on his return to the States. The last thing he expects is to be held captive in the six-thousand-year-old buried city of Telassar, ruled by the beautiful Queen Candace. In Queen Candace's glittering palace, surrounded by diamonds, rubies, sapphires—wealth beyond his wildest dreams—Reuel discovers his true Blackness and the painful truth about blood, race and the "other half" of his history which has never been told.

Relevant, thought-provoking, and entertaining, Hopkins's novel is intended, in her own words, to "raise the stigma of degradation from [the Black] race" and its title, Of One Blood, refers to the biological kinship of all human beings.