Tales of the Slayer 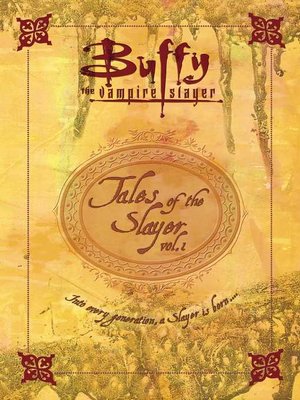 View more libraries...
Into every generation, a Slayer is born. One girl in all the world, to find the vampires where they gather, and to stop the spread of their evil and the swell of their numbers. In our time, that girl is Buffy Summers. But Buffy is merely one Slayer in an eternal continuum of warriors for the Powers That Be.
We've known of others: The Primal Slayer, who stalked the earth and the forces of darkness in fierce solitude...Nikki, the funky hipster whose demise at Spike's hands lent an urban edge to his wardrobe and a bigger bounce to his swagger. Slayers by nature have a limited life expectancy; for each one who falls, another rises to take her place.
Tales of the Slayer, Vol. 1, chronicles Slayers past who have influenced — and are influenced by — the traditions and mythologies of yore. From ancient Greece, to aristocratic Slayers holding court in revolution-era France, to the legend of the Bloody Countess Elizabeth Bathory, to 1920's Munich, each girl has a personal history, a shared moral code, and a commitment to conquer evil, regardless of the cost....