The Cowboy Who Came Calling 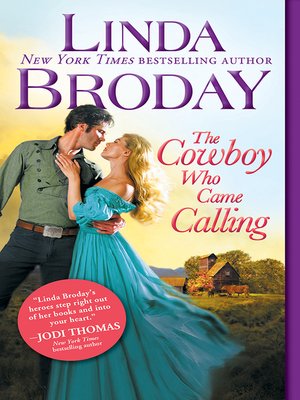 "Linda Broday's heroes step right out of her books and into your heart." —JODI THOMAS, New York Times bestselling author

A Former Texas Ranger on a mission
A determined woman slowly losing her sight
A love neither could have predicted
...and a danger that may steal their happy ending before it can even begin.

Glory Day may be losing her vision, but that doesn't mean she'll ever stop fighting. Determined to provide for her struggling family, she confronts an outlaw with a price on his head. But when a mysterious cowboy gets between her and her target, Glory accidentally shoots him instead. Flustered, she has no option but to take the handsome stranger home to treat his wounds.

Former Texas Ranger Luke McClain didn't plan to fall in love, but there's no denying the strength of Glory's will or the sweetness of her heart. But Glory's been burned before, and Luke will have to reach into the depths of his own battered soul to convince her to take a chance...

And trust that love is worth fighting for.

Texas Heroes:
Knight on the Texas Plains (Book 1)
The Cowboy Who Came Calling (Book 2)
To Catch a Texas Star (Book 3)

What People Are Saying About Linda Broday:
"Fans of classic Western tales will delight in the rough-and-tumble world Broday creates..." —RT Book Reviews for To Love a Texas Ranger
"A shining example of the talent of one of the best historical western authors." —Fresh Fiction for Forever His Texas Bride
"Broday's Westerns always captivate with realistic settings, rugged cowboys and feisty heroines." —RT Book Reviews, 4 Stars for Forever His Texas Bride