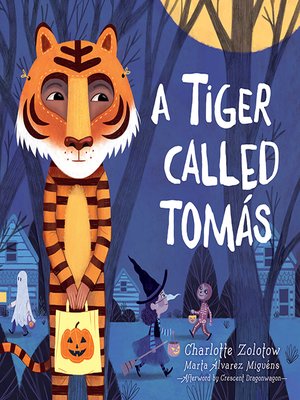 When Tomás and his family moved to a new house on a new street, he took it into his head that the new people might not like him.
"Of course they'd like you," his mamá said. "Why wouldn't they? ¿Por qué no? "
But Tomás didn't answer.

Tomás's Mom encourages him to go out and meet the kids in his neighborhood, but Tomas is too shy. Instead, he sits on his stoop, watching the world go by. But on the night of Halloween, opportunity arrives in the form of a tiger costume, complete with a mask that hides his identity. He can go trick-or-treating without anyone knowing it's him. But Tomás will soon discover his costume doesn't hide him quite as well as he thinks...