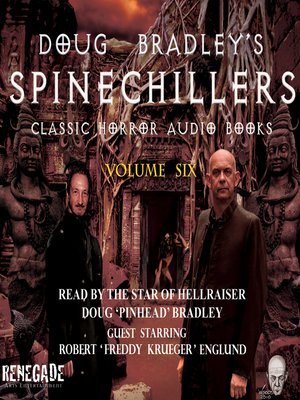 Welcome to Doug Bradley's Spinechillers Volume Six, one of the world's largest collection of high quality, classic horror audiobooks. Are you ready for our latest installment of enthralling horror masterpieces? Good, then we'll begin with Doug's well researched and passionate introduction to the authors and stories in this volume. This is closely followed by his literary majesty, Edgar Allen Poe, with the well known classic tale "The Pit and the Pendulum," a visceral account of a mans torment in the prisons of Toledo, during the Spanish Inquisition. Waking in a world of sensory deprivation and disorientation, Poe takes us through every spine chilling detail of terror as the prisoner seeks to evade his captors inventive attempts to end his life. Catch your breath before an English storytelling legend, Rudyard Kipling's "The Mark of the Beast." Taking you along a mist bound trail for a soldiers tale of the British Empire stationed in colonial India. His yarn of Lycanthropy and men, civilized and uncivilized, and of course werewolves, will leave you in fear of walking the streets alone...Now, we are proud to unveil our first guest reader, none other than the original, and in our terrified imaginations, the only, Mr Freddy Kreuger himself, Robert Englund. His first Spinechiller reading mesmerizes as he brings us "An Occurrence at Owl Creek Bridge," Ambrose Bierce's famous American Civil War tale. He paints a tantalizingly clear picture of a man's execution and his fantastical escape. Next up is HP Lovecraft's "The Rats in the Walls." A wonderfully chilling story of a descendents gruesome discovery of the true evil of his families ancestry. A mansion restored to its lost splendor reveals the horrifying secrets, discovered by a hunt for the scurrying rats in the walls. Volume Six comes to a close with a poem by John Milton Hayes, inspired by the work of Kipling. "The Green Eye of the Little Yellow God" is well known for its opening, and gives an overall feel of ironic justice. So stoke those logs, dim the lights, sit back and relax as the masters of classic horror fill your imagination with tales conjured from beyond our mortal coil.