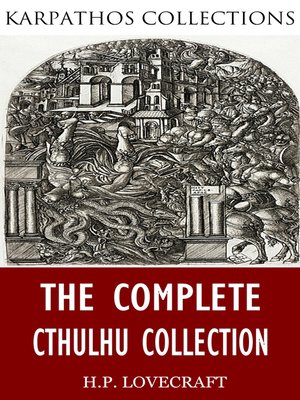 Karpathos publishes the greatest works of history's greatest authors and collects them to make it easy and affordable for readers to have them all at the push of a button.  All of our collections include a linked table of contents.

H.P. Lovecraft was an American author best known for his classic horror fiction.  Lovecraft was virtually an unknown writer during his short lifetime but he is now considered to be one of the most famous writers in the genre of horror fiction.  Among Lovecraft's best known works are The Call of Cthulhu, At the Mountains of Madness, and The Shadow Out of Time. This collection includes the following:

At the Mountain of Madness

The Call of Cthulhu

The Case of Charles Dexter Ward

The Colour Out of Space

The Dreams in the Witch-House

The Haunter of the Dark

The Shadow Out of Time

The Shadow Over Innsmouth

The Thing on the Doorstep

The Whisperer in Darkness