Lexi Carmichael Mysteries, Volume 3: No Room for Error ; No Strings Attached ; No Living Soul ; No Regrets 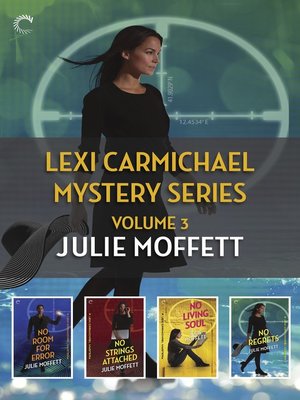 View more libraries...
Don't miss these three full-length mysteries in the Lexi Carmichael Mystery series from Julie Moffett
No Room for Error
After a series of high-profile cases at my cyberintelligence firm, I was looking forward to a simple job. All I had to do was personally deliver a revolutionary microchip to a manufacturing plant in Indonesia. Easy, right? Wrong.
Someone else wants the design and is willing to kill to get it. A failed hijacking attempt lands me, Basia and our boss in the middle of the jungle. Our mission is clear: protect the microchip design from the hijackers on our tail...and survive. But how can a geek girl like me survive without access to my beloved technology?
No Strings Attached
Leave it to me, Lexi Carmichael, to become a target for an elite organization of cyber criminals simply by being in the wrong place at the right time. As if I didn't have enough to worry about, I now have to keep my eyes peeled for people trying to kill me.
After accidentally intercepting a dangerous hack into the NSA, things begin to get seriously complicated. Diplomats, danger and spies, oh, my!
With Slash and my loyal friends by my side, I'm in a race against time to stop a team of sophisticated hackers on a deadly mission. My team of geeks is brilliant...but derailing an international plot for revenge will take everything we've got.
No Living Soul
My work as a computer geek has me traveling around the world, solving mysteries and fighting bad guys. You'd think I would've expected to be plagued by danger when I headed to Egypt with my best friend, Elvis, and boyfriend, Slash, to help track down Elvis's missing and estranged father. Nope.
Elvis's father is hot on the trail of an ancient and elusive artifact...one that people are willing to kill to find. Tombs, tablets and code come together as we follow a set of clues that has been waiting millennia to be discovered.
Cracking code is my specialty, but I never expected to tackle one from fifteen hundred years before the advent of written language. If the artifact falls into the wrong hands, we won't be able to rewrite history...
No Regrets
When I agreed to stand by my best friend, Basia, on her big day, I had no idea what I was in for. Bouquets and unflattering evening wear I can handle. But between disgruntled dates, a beach venue and suspicious packages, what else can go wrong? Oh, right—my parents don't know I've moved in with Slash. Oops?
Thankfully, I've got everything semi under control, at least as far as Basia and Xavier know. They can leave for their honeymoon happy, knowing Elvis, Slash and I will keep things safe at home.
Meanwhile, I've been asked to take a quick trip to retrieve a sensitive package from the British Virgin Islands. No hacking involved. Just show up, accept the package and bring it home safely. A cushy assignment, and a safe one. Right?
Wrong. Things start to unravel the minute I set foot on the boat to the island. Before I know it, I'm up to my neck in thugs, sand and trouble. I'm going to have to work fast to stop the bad guys before the sun sets for good on this unexpected beach vacation...