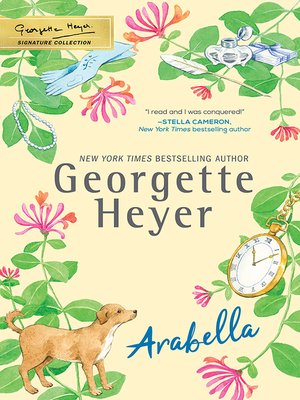 Georgette Heyer is known as the "Queen of Regency Romance," and you won't want to wait to find out why! You'll fall in love with Arabella Tallant, one of the most memorable and delightfully exuberant heroines you've ever met.

Daughter of a modest country clergyman, Arabella Tallant still dreams of a proper romance, and is on her way to London when her carriage breaks down outside the hunting lodge of the wealthy Mr. Robert Beaumaris. Her pride stung when she overhears a remark of her host's, Arabella comes to her own defense and pretends to be an heiress, a pretense that deeply amuses the jaded Beau.

To counter her white lie, Beaumaris launches her into high society and thereby subjects her to all kinds of fortune hunters. When compassionate Arabella rescues such unfortunate creatures as a mistreated chimney sweep and an abandoned dog—proving her love is refined by kindness and grace—Beaumaris finds he rather enjoys the role of rescuer and is soon given the opportunity to prove his mettle...