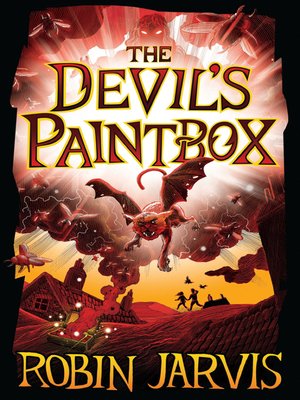 Legend of supernatural fantasy Robin Jarvis is back with his spellbinding sequel to The Power of Dark.

Lil and Verne may think they have quelled the Dark forces that tried to destroy Whitby, but they have no idea that the powers they've been meddling with are about to turn on them. Despite Lil's crucial role in saving her home from destruction, she notices that the townsfolk have become wary of her – even fear her. More than ever she needs the support of best friend Verne and the witch Cherry Cerise, but they are preoccupied by their attempts to uncover more secrets of the golden Nimius.

When Lil finds an antique box of watercolour paints she welcomes the diversion, little realising that every time she uses it something nasty escapes. But it is while they are distracted an old enemy finds a path to their door . . .

Robin Jarvis started writing in 1988 and quickly became a bestselling author of children's books with his Deptford Mice and Whitby Witches series. The Devil's Paintbox is the second of a hauntingly good new series set in the atmospheric North Yorkshire coastal town of Whitby. You can find out more at www.robinjarvis.com or follow him on Twitter @robinjarvis1963