ebook ∣ Mobile: An Unofficial Guide to Tips and Tricks That Other Guides Won't Teach You · Hacks for Fortniters 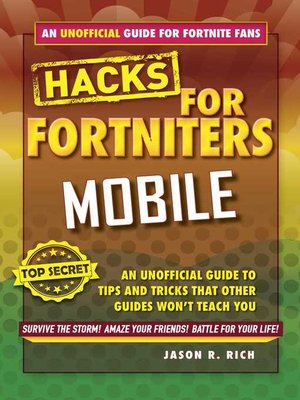 View more libraries...
Fortnite: Battle Royale Hacks: Mobileoffers a comprehensive introduction to playing this massively multiplayer, online-based game while on-the-go from a smartphone or tablet. For example, it focuses on customizing the game controls using the Customizable HUD (Head-Up Display) interface and discuss the pros and cons of using a Cellular Data Connection versus a Wi-Fi Internet connection when playing.
Each section of this unofficial strategy guide covers a different aspect of the game play experience. The book contains hundreds of full-color screenshots taken using an iPhone and iPad, and potentially Android-based devices as well. Targeted to readers age 8 and up, Fortnite: Battle Royale Hacks for Mobile will be a full-color, unofficial strategy guide that will focus on: