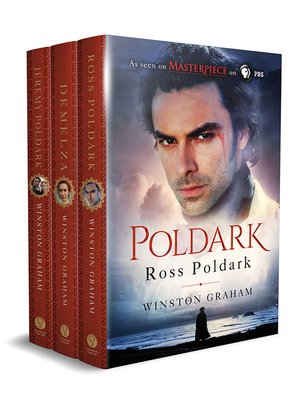 NOW A MASTERPIECE™ SERIES ON PBS®

The Poldark Saga is the masterwork of Winston Graham's life, evoking the historical period like only he can and creating a work of rich and poor, loss and love, that you'll never forget.

In the first novel in Winston Graham's hit series, a weary Ross Poldark returns to England from the Revolutionary war, looking forward to a joyful homecoming with his beloved Elizabeth. Instead he discovers his father has died, his home is overrun by livestock and drunken servants, and Elizabeth engaged to his cousin. Ross has no choice but to start his life anew.

In the enchanting second novel in the Poldark series, Demelza Carne, an impoverished miner's daughter rescued from a fairground brawl, now happily finds herself Ross Poldark's wife. But the events of these turbulent years put the strength of their romance and their marriage to the test.

Ross Poldark faces the darkest hour of his life in this third novel of the Poldark series. Reeling from the tragic death of a loved one, Ross is brought to trial for the sacking of a nearby grounded ship, and despite their stormy marriage, Demelza tries to rally support, to save him and their family. As the drama unfolds, Jeremy Poldark, Ross and Demelza's first son, is born...

A thrilling historical saga of romance and family drama, this bundle of books is the perfect introduction to the series for readers who loved Downton Abbey.