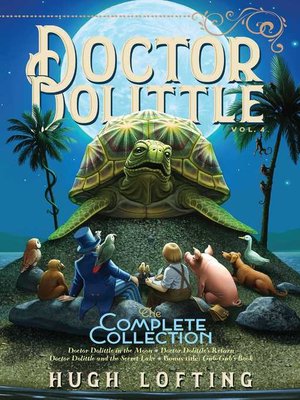 Journey into the world of Doctor Dolittle, the kind and eccentric naturalist who can speak with animals. Working with original author Hugh Lofting's son, these books have been fully updated for the modern reader, all while retaining the full charm of the originals.

Rediscover the children's literature classic with four novels from the beloved series!
This concluding volume delves into prehistorical puzzles that begin with the Doctor's arrival on the lunar surface in Doctor Dolittle in the Moon. There he not only meets the Moon Man and intelligent plants, but learns how the moon came to be in the first place. In Doctor Dolittle's Return, he sets out to reveal all he learned on the moon, but is no sooner off to Africa to rescue his old friend, Mudface the turtle, the last living passenger of Noah's Ark. In Doctor Dolittle and the Secret Lake, we at last hear his fascinating tale of The Great Flood.

This complete collection of the tales of Doctor Dolittle concludes with the delectable dessert that is Gub Gub's Book, in which the famous pig writes a book of his own: an encyclopedia of food!