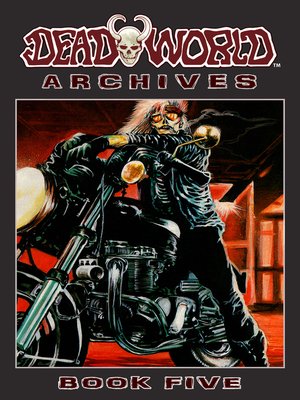 With over 100 issues released and 1,000,000 copies sold Deadworld arrived on the zombie apocalypse scene well before The Walking Dead and presents a different take on the global nightmare. This Book Five Archive edition collects issues #19-23 of the first volume of Deadworld. Also included, the original tale of "Deadworld: Guns for Sale", from Caliber Presents #8. As Dan and Joey depart the community they were staying with, a band of survivors in Michigan decide to head to the wilds of the Upper Peninsula, hoping that the cold weather and sparse population will inhibit the menace of the walking dead. Lead by John this ragtag group races for the remote area, hoping they can establish their own civilization. Meanwhile King Zombie continues his quest to find these humans and put an end to their meddling as he seeks to fully take over the world under his dominion, backed by his growing zombie horde."This is the original zombie comic and it's easy to see why it's lasted so long." - World's Heavyweight Comics.