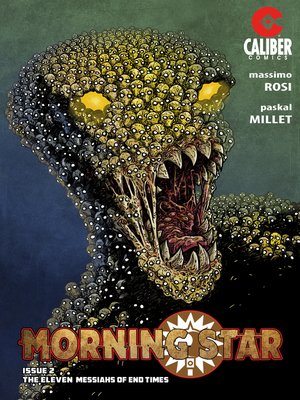 MORNING STAR is a unique agency financed by the Vatican to protect the human world and hunt supernatural creatures that use their paranormal powers for evil purposes. It is an organization base around the world that has existed from centuries, ever since the last of the Knights Templar disappeared. But over the years things have changed, the individuals within the Church funding the group have become less devoted to religion, and increasing skeptical to the cause of killing paranormal evil creatures. Which can have dire circumstances for the world. THIS ISSUE: "THE ELEVEN MESSIAHS OF THE END TIMES" The path darkens for Morning Star as two of its operatives, Max Laguard, the hard-drinking telepath, and the Aaron Teller travel to Mexico to break out a friend and ally Big Jaws from prison. As they return with their recruit, Olga travels in the land of the dead and witnesses the terrifying approach of the powerful demonic entity, Legion. Meanwhile, in the ruins of an ancient Babylonian temple outside of Baghdad a mysterious man uncovers an ancient artifact with terrible powers and uses it to awaken a long-dormant deity to help pave the way for Legion's arrival.