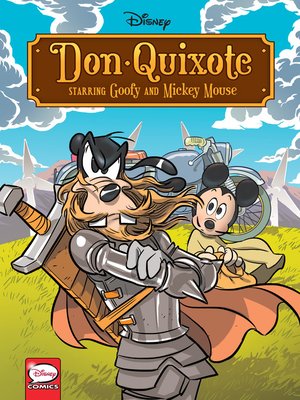 View more libraries...
A chivalrous knight-errant and the power of his imagination finds reality in this adaptation of the classic novel by Miguel de Cervantes that stars Goofy and Mickey Mouse!
Goofy is an uptight comic book store manager with not a care for the fantastical stories in the comics he sells. Mickey, on the other hand, is an eager, enthusiastic store keeper, rejoicing in the next new release. When a box of comics accidentally knocks Goofy over the head, he wakes with a case of literary possession—assuming the persona of knight-errant Don Goofote of Castilla! Worried for his friend's psyche, Mickey humors Goofy's newfound identity and undertakes his place as squire, Sanchito Mouse! For Don Goofote, though the line between fantasy and reality is blurred, he won't let anything escape his binoculared eyes and they battle criminals, giants, and beasts. But there's something more sinister lurking beneath Goofy and Mickey's city—something far from make-believe and beyond their dreams . . . Will Don Goofote and Sanchito Mouse find a way back to reality in time to save the day?