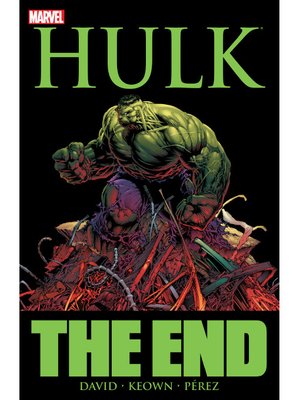 Collects Hulk: Future Imperfect #1-2, Incredible Hulk: The End #1. Chronicling the final days of the Green Goliath! Presenting a searing vision of the future in which Bruce Banner, the Incredible Hulk, is the last man on Earth. It's the Hulk's final battle, as "The Last Titan" wrestles his inner-demons in order to discover his place in a dying world - if only he can survive! Plus: The testing of the first Gamma Bomb thrust upon Robert Bruce Banner that which he would come to believe would be his greatest nightmare: his unwilling transformation into the Incredible Hulk. He believed wrong. Now, having been dragged into the future - into a post-holocaust, dystopian world - Bruce Banner discovers that his nightmare has a whole new name: the Maestro. This is a nightmare that only Hulk can end. For he knows that he himself is responsible for the presence of the evil Maestro.

Hulk: The End
Copy and paste the code into your website.
New here? Learn how to read digital books for free